Loop Road No.2 and Toranomon Hills

The Shiodome and Roppongi/Akasaka areas were isolated urban islands, prime real estate that were ripe for development, but difficult ownership patterns between many stakeholders had held back its development. The major new artery will create new connections between the centers, bay area and further out to Haneda Airport to allow the blossoming of the grand design for future city Tokyo.
Shintoradori St., the new section of Loop Road No.2, has a 13meter pedestrian walk on each side of its 40meter right-of-way creating a large open space unique in Tokyo for its scale. The Toranomon Hills complex forms the crux of a new urban network that integrates offices, retail spaces, conference facilities, residences and a hotel in a high density tower with an open space at its base that continues the green planting of the pedestrian walks along Shintoradori St. into the atrium, step garden and lawn garden of the oval park. The spatial continuity of the area communities was a planning priority and the resulting vibrancy and richness of the compact city breaks new ground in urban design. The new road is envisioned as the traffic backbone of the next Tokyo Olympics/Paralympics in 2020. Toranomon Hills will spark further development, which is critical for Tokyo to win out as a Global City, an international center for business and culture. 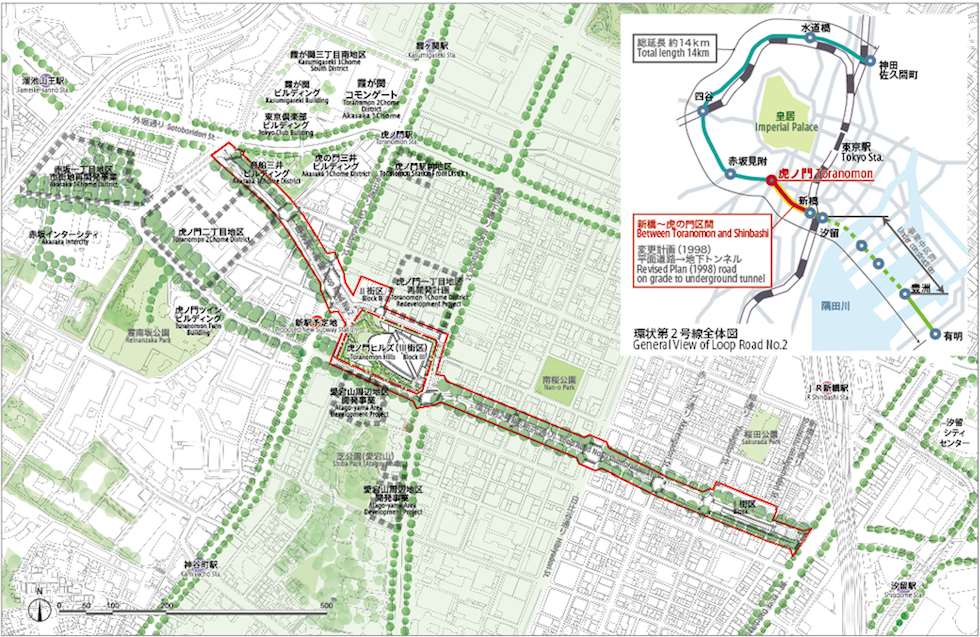 From “Road Building” to “Community Building”

Roop Road No.2 was designated in 1946 as Urban Planning Road with “100meter width and 9.2km length from Kanda Sakumacho to Shinbashi with the portion between Toranomon and Shinbashi nicknamed the “MacArthur Road”. In 1950, the planned width was reduced to th present 40meters. In 1989, “Multi-Level Road System” was promulgated and it became possible to integrate roads and buildings in a comprehensive development. It was decided to utilize the scheme to realize the long delayed road while maintaining the life basis of the stakeholders. In order to accommodate to the scheme, the planned road was re-designated to run underground between Toranomon and Shinbashi. By reducing the cost for land acquisition in central Tokyo with its high land prices, the impetus for “road building” washighly advanced. Later in 2002, the Metropolitan Government of Tokyo introduced the “Project Cooperator Method”, and further decided on “Special Designated Constructor Method” for the Project and the project evolved into a “Community Building” activity. The Metropolitan government cooperated with private developers in “Community Building” to bring about the 6000m2 open space and Toranomon Hills complex which tightly integrates various urban functions above the main artery road by utilizing “Multi-Level Road System” framework. 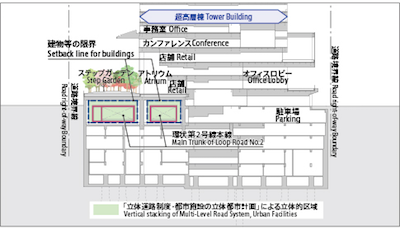 Toranomon Hills was realized through the dedicated efforts, ideas and cooperation of Tokyo Metropolitan Government, local stakeholders, road way residents, and the Special Designated Constructor, Mori Building Corporation to integrate road and building, public and private in a true community building effort. The completion of the Toranomon Hills/Loop Road No.2 artery project reduces the congestion in central Tokyo and promotes the development of the roadside and bay area. It is hoped the project will promote the transformation of the urban structure of Tokyo.